Fifty years ago, and twelve and a half thousand miles away from the desk where I sit writing these words, I left school, I left home, and I set out into the wide, wild world in order to see just what it was like...

This July my old school mates are holding our fiftieth annual reunion and the organiser has reached out to everyone who can still be contacted in order to try and make the occasion as special as it can be. I won't be there in the flesh, though I will be there in spirit. But to try and bridge the gap between here and there, I wrote this little piece, and I stuck in a photograph of me so that everyone who attends the reunion can have a good laugh.

The organiser has promised to take lots of photos of the actual event, and he'll send them to me so that I too can play the game of "Who the hell is that?". It will be fun to see who has changed the most, and I suspect it will also prove to be very annoying when I encounter the several swine who clearly have a painting hidden in their attic, and who therefore look as if they left school ten years ago, rather than fifty years ago like the rest of us. I know there will be some people like that because I've had a sneak preview from one or two of them already!

So this is what I've told everybody about how I've spent the fifty years since last I saw them all. Maybe you will find it interesting as well...

Hello to you all.

After I left school, I went to university. Anything to put off the evil day of having to get a job! I studied chemistry for no very good reason except that I'd always been good at it. The subject always came easily to me, though I have no idea why. However I soon discovered that there's nothing like studying something in depth at university to disillusion you with the subject, and it wasn't long before the urge to shake a test tube had completely disappeared from my life. Nevertheless I persevered with my increasingly tedious studies. I survived the usual student rituals of sex, drugs and rock and roll (I remember that The Incredible String Band were almost a fixture on the campus — they seemed to give a concert every couple of weeks or so), and eventually I graduated with a respectable degree. Now I had no choice — I really did have to go looking for employment...

I got a job with the Royal Society of Chemistry. They had a team of people investigating the possibility of using computers to search the world's chemistry research literature — the kind of thing that Google does for us these days, except that the Royal Society's databases were much smaller and more specialised than Google's are. But the principle is exactly the same. As time went on, I got more and more interested in exactly how the computers did their job, and I got less and less interested in the chemical information that they were sifting through. Then, one day, I saw a job advertised in The Times...

The New Zealand Dairy Board were recruiting programmers and they were holding interviews in London. The advert said that anyone they invited to London for an interview would have their travel expenses reimbursed. Neat! A free day in London! There would be a boring half hour in the middle when the interview took place, but I could cope with that. I sent off an application.

I was quite relaxed at the interview. After all, I didn't actually want the job. I just wanted a day in London. "What do you know about indexed sequential files?" asked the interviewer.

Rather to my surprise, I was offered a job. Furthermore, the offer said that the Dairy Board would pay half my travel expenses when I arrived in the country and, if I stayed with them for a year, they would pay the other half of my expenses. So, for the sake of a year, I got a free trip to the far side of the world. Who could resist? Certainly not me. And so, in January 1981, I arrived in New Zealand. I've lived here ever since.

It turned out that the reason the Dairy Board was recruiting staff in England was because they were such a terrible employer that they couldn't find any New Zealanders who wanted to work for them! I think every programmer in the country had passed through their offices at one time or another, and the Dairy Board had simply run out of local talent. So, like everybody else, I stayed with the Dairy Board for the requisite year, collected the rest of my expenses, and then handed in my notice.

I bummed around for several years doing various computer consultancy jobs. Along the way I gained quite an in-depth knowledge about the Unix (and later Linux) operating systems. If you don't know what Unix and Linux are, consider yourself lucky! Then I got a job teaching Unix and Linux system administration ideas and techniques to anyone who chose to come on our (quite expensive) courses. I turned out to be rather good at teaching, and I enjoyed doing it. It was a much better job than being a real system administrator looking after real computers. When you are a teacher, nobody rings you up at 3.00am to complain that the system has crashed and what are you going to do about it! I did that teaching job for the next twenty five years until I reached retirement age, whereupon I retired. As one does.

The years passed. I got married, divorced and married again. My wife Robin is Australian. We've been together for nearly twenty years now, but she still remains proudly Australian. I, on the other hand, have been a New Zealand citizen for more than thirty years. I'm still eligible to have a British passport, but my last one expired in 1993 and I never bothered renewing it. 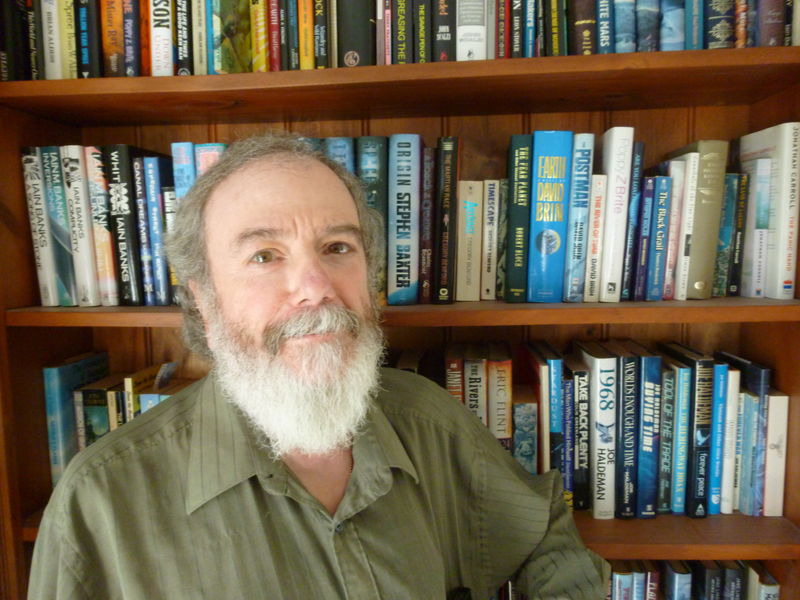 This is me today. The books behind me are all autographed by the authors.
Many of the books are first editions and/or numbered limited editions.
I'm very proud of the collection, though I must admit that over the last fifty years,
I've spent far too much money on it! 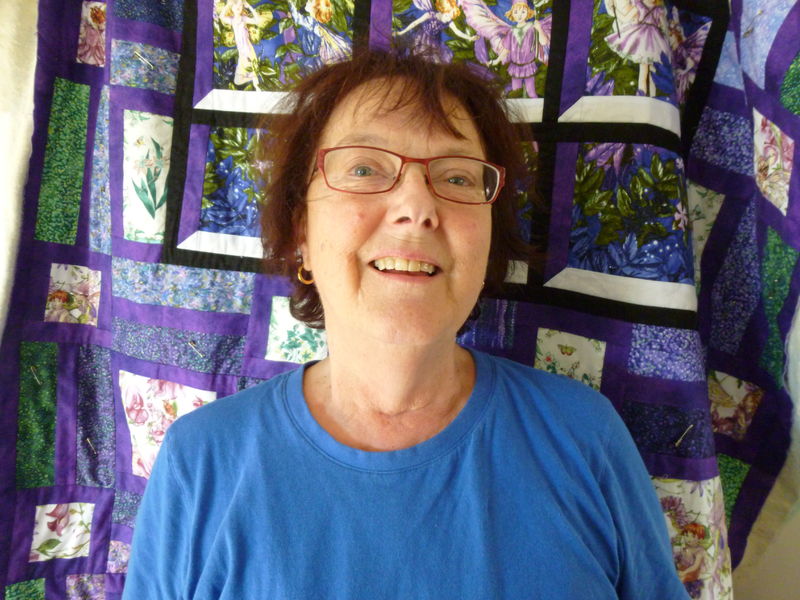 This is Robin, standing in front of one of the many quilts that she has made.
She really is a very accomplished quilter. This one is her particular favourite,
and naturally she's extremely proud of it.

We've both been owned by a large number of cats over the years, though at the moment our house has no cats in it. Our last cat, Harpo, died just a couple of months ago. However, cats happen — so I won't be at all surprised if more of them turn up soon. Meanwhile, the house is owned by my dog Jake. He's a huntaway, a New Zealand breed. They are farm dogs, bred to herd sheep and cows. Jake was actually  born on a farm but he turned out to be not very good at his job (rumour has it that he's scared of sheep) so the farmer put him up for adoption. Now he's opted for a more laid back and intellectual life style with me and Robin. 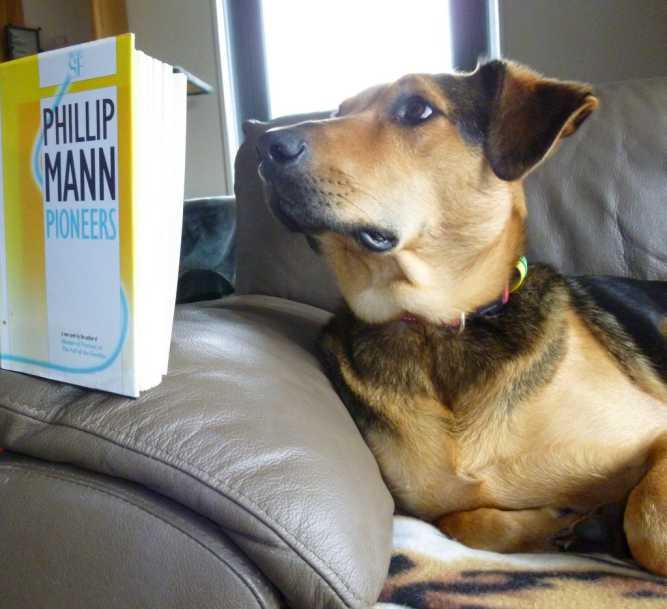 Jake shows off his erudition.

Having a dog imposes quite a ritual on a retiree. I get up about 5.30am every day. Then, after I've fortified myself with a cup of tea, Jake and I go for our morning walk. We usually take an hour or so to walk about 5km. Jake says hello to all his friends, both human and animal, and he leaves a lot of messages for the friends who don't happen to be around today. He has a lot of friends. He's world famous in our village. Total strangers come up to me in the supermarket and enquire after Jake's health. He knows far more people than I do!

By the time we get home from our morning walk, Robin has generally surfaced, and is making a pot of coffee. Jake doesn't like coffee, so he goes into the garden and drinks the water that has soaked through the earth in the flowerpots, down into the trays that the pots stand in. It's the same colour as coffee, and he prefers the taste.

At lunchtime, Jake and I go to the park where he can run off the lead. I walk about 4km round the park and Jake runs about three times that distance as he plays chase with all his friends. He drinks deeply from the river, and often he has a swim in it as well. Sometimes there's a dead sheep floating in the river. That's always a red letter day!

At about 4.00pm Jake and I go for our evening walk. Depending on exactly which route we decide to take, we probably walk somewhere between 3 and 4km. Then, when we get home, I feed Jake his evening meal and start to cook dinner for Robin and myself. All in all, we lead a leisurely and very pleasant life.

When I was working, I lived in the main cities — Wellington and Auckland and then Wellington again. But I travelled around a lot, running courses in most of the larger cities and towns. I also ran a lot of courses in Australia and the Pacific Islands. If you ever get a chance to travel to the Pacific Islands, do so. Trust me, a visit to the islands should be on everybody's bucket list.

Once I retired, Robin and I decided to move away from the hustle and bustle of city life. These days we live in a small village called Havelock North on the east coast of the North Island of New Zealand. It's quite a rural area, though Havelock North itself is really rather posh. It is full of both very expensive shops and bejewelled ladies who lunch. When Robin and I were house hunting, we decided that we had to live in Havelock North so that we could lower the tone of the place. I don't know if we've succeeded in our ambition, but we are trying hard. Everybody has to have a hobby.

That's all for now.